How to Confirm That Your Case Is Good Law

One of the most widely used citators is called Shepard’s Citations, which is available to USC users via LexisNexis Academic in the "US Legal" folder). Checking the status of your cases with Shepard's Citations is sometimes referred to as "shepardizing" your cases.

On the Shepard's Citations page, you can enter your case citation . If you find that your citation is not recognized, click on the "Citation Formats" link, which will take you to a "Browse Citations" page. Once there, click on the "Find Citations" link and then enter the name of the reporter containing your case (or the reporter abbreviation you have). Look for your reporter from the list provided and click on the corresponding abbreviation for that reporter. You will then be given a customized citation search form in which you merely have to enter the volume number and page number from your citation (as shown above).

When you enter your citation, you will retrieve the Shepard's Summary (like the one below), which tells you if there is anything in your case's history that negatively impacts the authoritativeness of your case, as well as the different types of treatment given to your case by later cases. 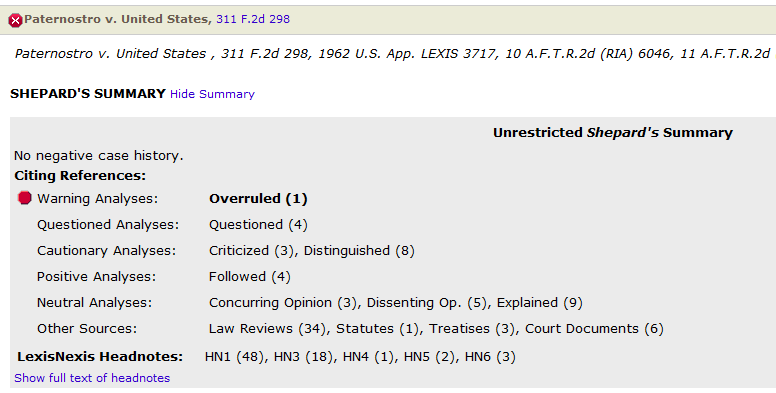 For example, if you are interested in the status of the 5th Circuit Court of Appeals case Paternostro v. U.S., 311 F.2d 298 (5th Cir. 1962), you will find from the Shepard's Summary for this case that while the case has no negative case history, there were some later cases that negatively treated the Paternostro case (specifically, it was overruled, questioned, criticized, and distinguished). There were also some cases that positively treated the case (indicated by the "followed" designation). Because at least one part of the Paternostro opinion was overruled, a red stop sign symbol is placed next to the Paternostro citation. (This symbol is reserved for opinions that have been overruled, reversed, or negatively impacted in some other significant way.)

The additional screen shot below is from a Shepard's report for a different case, Addonizio v. United States, 573 F.2d 147 (3d Cir. 1978) and illustrates how Shepard's provides information on a case's history. The citation entered is highlighted in gray. The lower court opinion in this case that preceded the 1978 3d Circuit opinion is listed above the highlighted citation (as "Prior History"), and the opinions that came after are listed below (as "Subsequent Appellate History"). Note that the 3d Circuit's 1979 decision in this case was reversed by the United States Supreme Court (which is why the red stop sign symbol appears near the top of this screen). 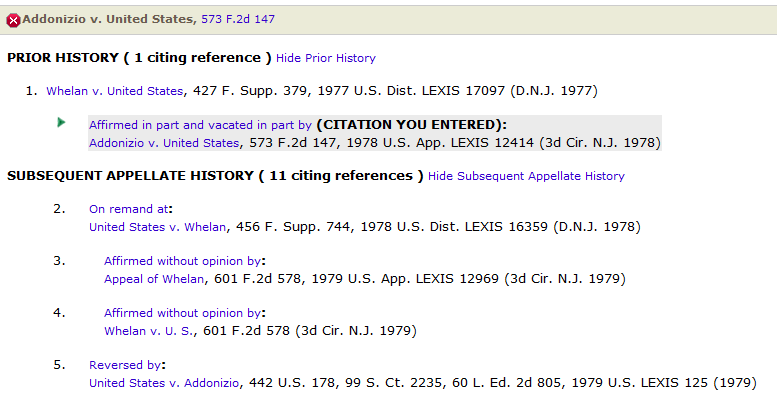 It is important to note that even if significant negative history or treatment is reported for a particular opinion and a red stop sign symbol is included in the Shepard's report, it does not mean that the opinion can no longer be cited as precedent. It just means that although at least one principle, rule, or holding in the opinion is no longer recognized as "good law," some portion(s) of the opinion may still have precedential value. It is therefore important to read carefully the cases that negatively affect the cases in which you are interested to see which aspect(s) of these cases have actually been affected.