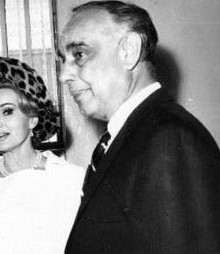 Manuel Ruiz Jr. (1905-1986) was the first known Latino USC Law School graduate. Widely considered to be the “California dean of Mexican American lawyers,” Ruiz would hone his legal knowledge to benefit the Hispanic community and would go on to serve in the Nixon administration.²

Born in Los Angeles, Ruiz was the son of immigrants from Mazatlan, Mexico. Growing up in East Los Angeles, he distinguished himself in his local high school as an athlete and scholar by being the captain of both the track and debate teams. Upon graduation, he was also class valedictorian.¹

Though he had a graduate law degree from USC Law School and had passed the state bar exam in 1930, existing racial prejudices at the time prevented him from joining any one of the established law firms in the city. Despite this, Ruiz started his own law practice that specialized in private international law.¹

During World War II, Ruiz was a community organizer and activist. He founded and participated in a variety of organizations that defended Hispanic youths against the discriminatory practices that had been frequent during this era. During this time, Ruiz participated in the legal defense of a group of wrongly accused Hispanic youths in a case known as the Sleepy Lagoon Case. Though convicted in 1942, their sentences were reversed by the District Court of Appeals two years later.¹

In the 1960s, Ruiz published the short-lived newspaper, "The Voice of the Spanish-Speaking People." In 1963, he joined the Mexican American Political Association (MAPA) and helped draft its by-laws. In 1964, he accepted the position of National Chairman for the Hispanic Division of the Republican National Committee. Between 1965 and 1968, Ruiz served as legal counsel for the non-profit organization War On Poverty, Inc., which focused on grass-roots activism to tackle both urban and rural poverty. In the late 1960s and early 1970s, he also served on the board of directors of the Legal Aid Foundation of Los Angeles.¹

The years of advocating on behalf of Hispanic-Americans culminated in 1970 when President Nixon appointed Ruiz to the U.S. Commission on Civil Rights (USCCR). During his tenure on the commission, the USCCR released an important report entitled, “Mexican Americans and the Administration of Justice in the Southwest,” which uncovered police misconduct and other discriminatory legal practices that had negatively impacted the Hispanic community at the time and proposed reforms to address these issues.¹